I hope you don’t mind terribly, but I’m going to do a little bit of end of year self-promotion. It’s not in my nature, and I always want to duck and hide when I have to do it, but being an author in a digital age means actually telling people you write stuff. (I’ll seriously stand at a book table at an event and not mention that I’m one of the authors.)

And since I set up this blog with the intention of talking about writing, among other stuff, I should probably talk about my writing, too. I’m only in the early stages of my next project, so I’m not quite ready to delve into that yet. But I should tell you about the other stuff floating around out there, especially as I released two novels this year.

(I’m not going to talk about my short stories, which you can find over on the books page. This is just the novels. Hope that’s okay.)

So. Here it is. I’ve published six books since I began in 2016. They all fall under the ‘speculative fiction’ label, meaning there’s aspects of fantasy/sci-fi/chaos in them without them falling directly into those categories because they’re mostly based on the world we know, they just have some fantastical elements in play. (Except for Changing Course, which is an actual sci-fi.) I write under the name Brey Willows, because I like having a pen name and I’ve published other stuff under my real name, mostly academic, so I like the separation. And Villasenor doesn’t exactly roll off the tongue, unless you come from a region where the name is common.

Here is the link to all my books, and here they are below. If you read and like them, a review is always a lovely thing for an author. If you know of other people who might like them, telling them about my books would also be lovely. And books make lovely holiday gifts, too… Just sayin’.

Here they are, complete with blurbs and links.

Her escape pod lands on Indemnion, a planet known for its raw, raucous societies, and Jessa’s top priority is keeping the few survivors with her safe while finding a way back home. That’s when she meets mysterious scrounger Kylin Enderson, a useful and attractive distraction she can hardly afford with so much at stake.
Kylin resents Jessa’s silver spoon attitude, especially since Jessa has no idea what real life is like. Kylin has enough trouble keeping ahead of the creditors she owes for some of her more secretive undertakings, without having to help the beautiful captain who fell from the sky. But Kylin’s always been a sucker for a damsel in distress, and this time is no different.
When Kylin’s secret comes out, it puts their growing attraction, as well as Jessa’s life, in danger. Will everything come crashing down, or can they change course before it’s too late?

Maggie McShay wants a little magic in her life. Something more than the drab existence of going to work and coming home to a cat that barely tolerates her.

When she spontaneously replies to a want ad asking for someone to take care of a fairy tale cottage, it turns out magic wasn’t as far away as she thought. Maggie discovers she wasn’t who she thought she was either. Recalcitrant fairy tale shepherd and ladies’ woman Kody Wilk shows Maggie a world she knew nothing about…a world they need to save before the villains of the world’s fairy tales take over New York City.

It’s up to Maggie, her grumpy, shape-shifting cat, a dwarf hell-bent on finding romance, and Kody to set the fairy tale world to rights. The big bad wolf has nothing on Maggie McShay. 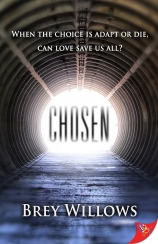 Climate change moved faster than anyone anticipated, and the Earth, along with many of its inhabitants, is dying. When a military convoy arrives to pick up Devin Rossi and Karissa Decker, along with dozens of other bewildered people, the two have no idea they are part of a group selected by the government to be transported to a space station preparing for the colonization of another planet. They are members of the Chosen.

On their way to the military base, their convoy is attacked and Devin and Karissa learn the real reason behind their selection. Their attraction grows as they struggle to survive and wrestle with the decision to continue on to the base as part of the Chosen, which means leaving millions of others behind to die.

Will they face an uncertain future together, or will the cost be too high?

If you knew the gods worked from a building in Santa Monica, California, would it change you?

Avenging fury Alectho (Alec) Graves has been tasked with saving the world, when she isn’t out seeking justice for those innocents who suffer at the hands of evil-doers. If she fails in her mission, those she loves will cease to exist.

Selene Perkton is a philosophy professor in Los Angeles. She lives an ordinary, well scheduled life, and knows her place in it. When Alec appears, the world she thought she knew becomes a very different place.

Can Alec and Selene put aside their differences, or will the evil lurking in the shadows manage to pull them apart?

Fury Tisera Graves needs a break. She wants a normal life, but she can’t see a way out of Afterlife. When the gods begin running marketing campaigns in an effort to woo followers, she steps in to keep them in line, although she really just wants to get away from it all.

Playgirl philanthropist Kera Espinosa made a nearly fatal mistake, and now she’s trying to make up for it by doing good work around the world. She’s got no time for the gods, who don’t do nearly enough. And she’s still searching for the people who nearly destroyed her. When she finds them, she’s prepared to sacrifice it all to make them pay.

When it comes time for both women to choose, will they find love or destruction?

Fun-loving fury Megara Graves is seriously tired of working so hard. With the world collapsing around her, she no longer has time for the hedonistic lifestyle she adores. When religion merges with politics and both gods and humans show their true colors, she wonders if it would be better to let the world burn itself to the ground.

Dani Morana, more commonly known as Death, is busy not just with people dying as usual, but with the deaths caused by Chaos as well. She’s been horribly lonely for a long time but knows no one could possibly love her for who she is. Overwhelmed when the world erupts in fear and violence, she needs someone to turn to.

Will Meg and Dani be able to find their way through the darkness enveloping the earth? Or will Death be the last one standing?